Get Started
Home » Uncategorized » “Magazines: The Power of Print"

“Magazines: The Power of Print" 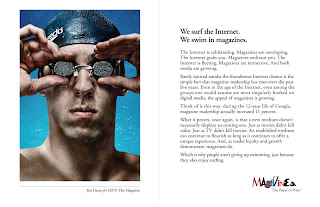 “We surf the Internet. We swim in magazines.” This is the current tagline for one of the largest print advertising campaigns created by the leaders of five foremost magazine companies—Charles H. Townsend of Condé Nast, Cathie Black of Hearst Magazines, Jack Griffin of Meredith Corporation, Ann Moore of Time Inc., and Jann Wenner of Wenner Media. “Magazines, The Power of Print” campaign will be seen as an ad in nearly 100 magazines across the industry as well as online, reaching nearly 112 million readers per month. The concept is simple yet empowering; magazines are a vital medium in our culture. Despite the common notion that print is dying out, magazines are actually thriving due to continuous consumer commitment. The publishers point to data from Mediamark Research & Intelligence that shows magazine readership has risen 4.3% over the past five years.

We, as a PR firm that is constantly interacting with print, enthusiastically support this campaign. We continuously write for and submit to magazine’s editorial staffs because the depth and lasting quality of print offers an amazing harmonization with the internet. Yes, times are changing and media is evolving, but we don’t believe there can be anything that replaces the powerful physicality of print. We write byline articles for over 125 magazines each year, many of which are in printed formats. Our select syndicated campaigns publish in between 50 and 300 newspapers. So, believe us when we say that print is alive and well.

There is something utterly divine about skimming your fingers over the glossy pages of a magazine or rejoicing at a new month’s issue arriving, bright and unscathed, in the mail. “Magazines continue to resonate on many levels with consumers, and this is reflected in the enormous trust and value readers have for their favorite titles,” Griffin says in the campaign’s press release.

As much as the campaign is geared towards consumers, it targets advertisers and industry influencers. “There’s a reason magazines are such an enduring and engaging media force. The format showcases our rich content and our advertisers’ brand messages like no other medium,” said Townsend. And according to Affinity’s VISTA Print Effectiveness Rating Service, 2005-2009, magazine effectiveness is growing. Ad recall has increased 13% over the past five years. Action-taking—based on readers recalling specific ads—increased by 10%. 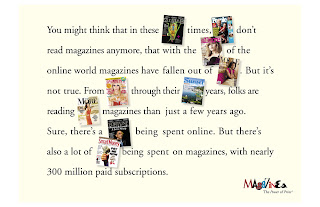 For more information about “Magazines, The Power of Print” and for a full list of interesting study findings showcasing exactly how popular print magazines are today, visit http://www.magazine.org/NEWS/magazines-the-power-of-print-campaign.aspx. Or better yet, flip open a magazine; the ads say it all. – We send our thanks and support to the publishers in mention. Keep up the great work you are doing, and let us know if and how we can assist you.

~ Sarah Kate and all of us at ECPR