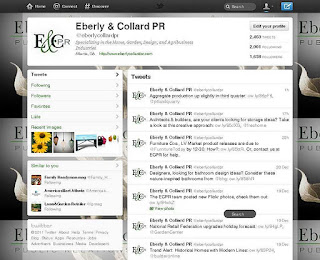 Have you noticed that Twitter recently revamped its website, making it easier for new users to navigate their way through the site? The previous, rudimentary design layout now features a sleek design, and makes for easy use. Each profile now presents a “Facebook” style timeline, which includes recent tweets and accessible information such as followers, images, lists, and favorite pages.

The “Home” page provides all the old features, with a few new and improved updates. For example, each tweet in the news feed can now be opened, allowing you to view the intimate details of the tweet, including those who have re-tweeted the post. Also, at the top left corner, users will see two more new features, the @Connect and #Discover tabs. The @Connect tab allows users to view all interactions, mentions, follows for an account. Thus, making it easier to communicate with and follow new and existing users. The #Discover tab enables users to view trending Twitter topics in a whole new way, based on a user’s connections, location and language.

So why the redesign? ECPR has its own take on why Twitter revamped its social networking site. The new Twitter seems to look a lot like Facebook’s Timeline. And, with other social media channels, such as LinkedIn, becoming more popular, Twitter’s redesign comes at the right time. The new design seems to entice users to “tweet” from Twitter, rather than from third-party sites like HootSuite. In addition, the new design could be related to a user’s eye movements. Twitter designers may have strategically placed items in locations where users focus their attention the most, including the top left of a page, as well as photos within tweets (which are now viewable directly in the news feed). Also, along with the new features, Twitter has launched “brand pages” for companies who are advertisers. In creating these “brand pages,” Twitter is making an effort to increase revenue through advertisers.

What do you think of the new Twitter; is it more user-friendly, or simply a way for Twitter to increase profits from advertisers? Please post your comments below, we would be happy to learn your thoughts on the new Twitter.

Poinsettias are a national phenomenon during the holiday season, but the history of these plants is not commonly known by consumers. In this blog post, the ECPR team will uncover the history of Poinsettias. Given the fact we have written about and publicized thousands of plants over the years, we thought a look at the story behind Poinsettias would be quite appropriate for our blog. We hope our friends and fans find the history of these holiday plants as fascinating as we do!

Poinsettias originate from the most southern regions of Mexico and Central America. Ancient Aztecs first discovered the plant species blooming in tropical highlands one winter, and named it Cuetlaxochitl, which means “flower that grows in residues or soil,” in the Aztec language of Nahuatl. Originally, the red leaves of Poinsettias were used to dye clothing and produce a form of cosmetics, while the milky-white sap was used to help reduce fever temperatures.

Poinsettias were first thought to be associated with Christmas back in 16th century Mexico. It is believed that a young girl, too poor to afford a gift for the celebration of Christ’s birthday, gathered weeds from the side of the road and placed them in front of her church altar. The crimson blossoms sprouted from the weeds into beautiful poinsettias. Later, during the 17th century, Franciscan priests, who resided near Taxco, located in the Mexican state of Guerrero, were said to have used full blooming Poinsettias as part of the nativity precession. The star-shaped leaf pattern is thought to have symbolized the Star of Bethlehem, and the red leaves were said to represent the blood sacrifice though the crucifixion of Jesus.

In 1828, Dr. Joel Roberts Poinsett, the first US Ambassador to Mexico, discovered the crimson-red plants while visiting the Taxco region. Enraptured by its beauty, Poinsett sent clippings of the plant back to his home in Charleston, SC. He then began propagating them in his greenhouses and sending samples to his friends. In 1833, German botanist, Wilenow gave the plant its botanical name of Euphorbia pulcherrima. It was in 1937 when the plant had been renamed to Poinsettia by William Hickling Prescott, wishing to honor Dr. Poinsett. Today, many professional growers cultivate Poinsettias, making them widely available to retailers and their consumers almost everywhere. Consider purchasing these beautiful plants this season for their gorgeous appeal as well as to support the growers who make them accessible.

The World of Concrete show is just around the corner. Set to take place at the Las Vegas Convention Center from January 24 – 27, 2012, the show is the industry’s only annual international event dedicated to commercial concrete and masonry construction suppliers. With more than 1,300 companies exhibiting at the show, approximately 50,000 attendees will be in search of the newest products and technologies on display. Industry professionals such as commercial contractors, concrete contractors, construction managers, designers and specifiers, general contractors, masonry contractors, residential contractors, precast/prestressed producers, architects, and more will be roaming the 50,000 square-foot showroom this year.

In addition to new product displays, a number of educational seminars, demonstrations, competitions and special events will take place throughout the duration of the show. Show goers will have the opportunity to learn how to lay concrete floors, repair concrete and measure performance and productivity as well as learn about how to use social media channels to customize marketing strategies. To view the full schedule of events and seminars taking place at this year’s show, click here.

The unlimited number of networking opportunities and educational experiences enables exhibitors and industry professionals to strengthen connections and capitalize on new trends for 2012. For those of you who are attending World of Concrete, visit the show’s website at www.worldofconcrete.com for detailed show information, travel and lodging suggestions and floor plans.