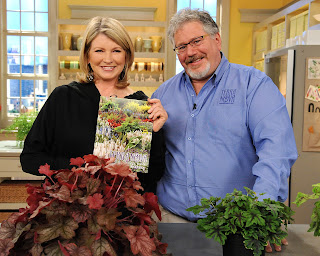 Terra Nova Nurseries’ president and well-known industry horticulturist Dan Heims recently made an exciting guest appearance on the Martha Stewart Show. Aired by the Hallmark channel late last week, the show included two full segments featuring Heims, who was introduced by Stewart as one of the nation’s leading breeders. The photo below features Dan with show producer Barbara Fight rehearsing for the taping.

The first segment included an interview between Stewart and Heims, during which Heims discussed plant discovery and breeding. Stewart asked about Terra Nova Nurseries’ process of plant exploration trips, tissue culture and propagation. Heims detailed the process for Stewart and a live audience during the taping of the show by including a demonstration of the stages of tissue culture. Additionally, the first segment also focused upon qualities Terra Nova Nurseries seeks in plants that lead to hybridization, and how this translates to robust plants with superior characteristics for gardeners.

The second segment provided Stewart and her viewers a look at Terra Nova Nurseries’ select new plants for 2011, specifically, Acanthus ‘Whitewater’, Cyclamen ‘Something Magic’, Heuchera ‘Georgia Peach’, Tiarella ‘Jeepers Creepers’, and Heucherella ‘Solar Power’. Stewart commented that she very much liked the plants and asked Heims to send the varieties to her. She concluded the final segment by showcasing the Terra Nova Nurseries’ plant catalog, saying that each member of the studio audience would be sent home with a copy.

The televised segments may be viewed on the show’s website at: http://www.marthastewart.com/article/new-plant-varieties.

Heims guest appearance is one of many speaking and similar engagements on his part each year, including a list of trade shows, garden shows, radio interviews, university events, and other public events. Heims was also featured as a radio guest on the Martha Stewart Living Channel, Homegrown, which aired via Sirius/XM on Tuesday March 15, 2011. To learn more about Terra Nova Nurseries, visit www.terranovanurseries.com. The photo to the left demonstrates part of the Martha Stewart Show production team prepping for the show.

For our media contacts, feel free to contact us at ECPR if you have interest in having Dan appear on your radio or television show. Byline articles on a variety of trade and consumer topics are also available. Garden Writers, industry pros, and friends in the business, post your comments about Dan’s news below.